Our next Local Warrior Award recipient award goes to Specialist Jack Kowall (Army), for serving in the Vietnam War as a Scout Dog Handler. READ HIS STORY BELOW!!!

Please join us for the award presentation on November 8th at 1pm, at the Office of Simpson & Simpson Accounting, 107 Weatherstone Dr., Suite 510. Woodstock, GA 30188. EVERYONE WELCOME!

Jack Kowall’s account of his time served in the army, during the Vietnam War: “I was born on July 27, 1948, in Donora, PA. a small town in Southwestern Pa. I attended local schools and graduated from Donora High School in 1966. I then attended California State College in California, PA. I was drafted in my junior year in September of 1969. 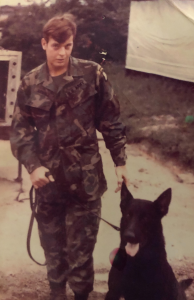 I entered the Army that month and was sent to Fort Jackson in South Carolina.  While at Fort Jackson, I attended Basic Training and Advanced Infantry Training, After AIT, I was sent to Fort Benning in Georgia. I was scheduled to attend NCO School, but due to a scheduling problem, I was asked to extend my time in the Army. In order to go to NCO school, I declined the extension. I was interviewed again and given several different choices of schools I could attend but all required extending my time in the Army. I asked if there was any school that I could go to that would not require me to spend more time in the Army. The young man I was talking to said let me check, in a few minutes he returned and said there is a Scout Dog Class starting on Monday that I could get into. I said ‘sign me up’, and I got to spend more time in the U.S. before going to Vietnam.

Dog school was great. I was given a German Shepard to train. We started with basic obedience and then got into the real mission of the dogs. We were trained to read the dogs; the dogs would go down a trail and alert on anything with a human scent. We would take turns hiding in the bushes as decoys. We would also set up trip-wires and ambushes the dog would have to find. Their dog never failed to impress us with their ability to find and alert their handlers. Our class started with about 90 guys, and after 12 weeks, about 30 of us graduated. We were given 30 days leave and orders to report to Oakland, CA. for deployment to Vietnam.

We arrived in country, July of 1970, and were sent to the dog school at Long Bein. The unit we would be assigned had arranged for our dogs to be there. We were immediately assigned a dog that we would spend the next year with. My dog, Eric, was an all-black Shepard and Lab mix. He was a veteran who had been in country for a couple years. Eric and I quickly bonded as we trained together for a couple weeks and were sent to the 33IPSD (Infantry Platoon Scout Dog) which was part of the 4th Division which was located in Pleiku. On my first day, at the 33rd after-morning formation, I got my first duty which was to burn manure. (Now that’s a way to start the day!)

In a few days, I was sent on my first mission. One of the veteran handlers was sent with me to train and be my Slackman. We were picked up at the helo pad and were dropped at a firebase where we boarded a resupply chopper going to a platoon in the field. As this was early in the day, the platoon was ready to move and I was there to walk point. Needless to say, I was as nervous as I it could be. I sent Eric out and we started down the trail as we moved forward. My eyes are focused on Eric, probably 110 yards down the trail his ears perked up and his nose turned up in the air. I called an alert and my slack agreed and sent out people on either side of the trail.  Shortly, they returned with no results and we proceeded down the trail again, within 50 yards I got another alert. We repeated the drill of searching the trail, after the third alert, slack man said to me, “Be more cautious and wait for something stronger from Eric”. We proceeded about a click (1000 Yards) down the trail and come upon a tunnel thru Elephant grass that had to be 20 feet tall. It looked like a highway that could continue for miles. I knew what Eric had been alerting on. I then completed my first mission, what a relief,.

In September, we received word that the 4th Division was being sent home. Anyone with less than six months left in-country would be sent home with the Division, but “Sorry Jack, you didn’t make it.” I was reassigned to the 42nd IPSD at Camp Eagle with the 101st Airborne Division. My dog and I traveled to Camp Eagle and joined the 42nd and continued our mission walking point. On one of my missions, I was moving up a hill and a grunt who was walking my slack was carrying a m79 Law which is a grenade launcher. (We rarely had our weapons on safe when on patrol). He stumbled and a branch hit his trigger and the rife was accidentally fired. The round clipped my ear as it passed by me! I was so lucky.

I completed my tour in July of 1971 and was sent home. My plan worked. I returned with 2 months to go, so I was given an early out and sent home. I spent 22 months in the army, with a year of it at war.”